With the global economy mired in recession as 2008 winds down, Korean tv stations have been finding it difficult to balance the budgets for their respective drama productions. The 3 major tv stations KBS, MBC and SBS have thus decided on a pay reduction (per episode) to save on the overall costs. 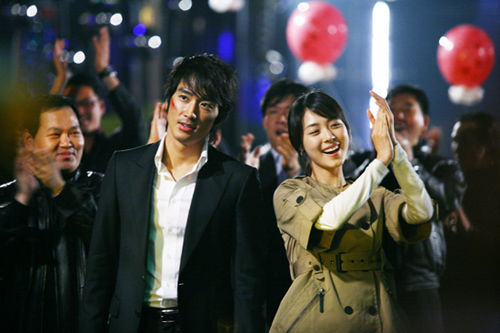 Korean tv stations have not been immune to the current economic downturn, with a drastic loss in revenue from advertisers buying ad space on television, leading to reduced budgets for drama productions. To get over this difficult period, the 3 major tv stations and the production companies have decided to “operate” on the salaries of top stars participating in the dramas. Their target? Hoping to reduce their pay per episode to 15 million won and below.

As a comparison, Song Seung Hun draws 70 million won per episode for East of Eden currently, having already reduced his original asking price beforehand. For salaries drawn by top stars like Bae Yong Joon, Choi Ji Woo, etc per episode, visit this link. The stars have yet to comment or agree on this. But the industry is in really bad shape this past year with productions being cancelled like Kwon Sang Woo’s Daemul while Yoon Eun Hye’s involvement in a drama fizzled out before pre-production most probably due to budget constraints.

It’s still not too bad for the Korean movie industry. For Won Bin’s upcoming movie Mother, despite having only completed 20% of filming, Japanese distributors have already started placing pre-orders for the rights.